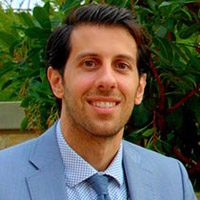 Vic A. Merjanian, Esq., is Founder and CEO of Titan Health & Security Technologies, Inc. Mr. Merjanian is dedicated to improving school safety, as well as organizational safety (spanning private and public businesses, NGOs, and governmental agencies).Â Mr. Merjanian envisioned Titan HST when he visited his Alma Mater High School before Christmas in 2013 and experienced first-hand the day-to-day experience of a high school student today. His beloved campus was on daily “lock down” – enhanced security measures, closed campus, a discovery Mr. Merjanian abruptly experienced when he was nearly tackled by a “security parent” in the front office after nonchalantly walking onto campus.

Mr. Merjanian believed there has to be a better way to empower students, staff, teachers, police and parents in light of the daily threat of school violence and other emergencies, without needing to tackle un-expecting peaceful visitors. Titan HST was created to provide immediately accessible, organizationally, and technologically structured comprehensive 2-way emergency communication – empowering all, reducing anxiety and response time, and enabling incident resolution.

Mr. Merjanian received a Bachelor of Arts in Sociology from University of California, San Diego. Subsequently, he received his Juris Doctor from University of San Diego, School of Law where he also served as co-founder and editor-in-chief of the inaugural edition of The San Diego Journal of Climate & Energy Law, the nations first student-run climate change and renewable energy law journal. He is fluent in Armenian and is also proficient in basic Spanish and has classical training in piano, music theory, and guitar.

Mr. Merjanian serves as a Board Member on the Board of Directors for Two Wings, a non-profit organization dedicated to educating, mentoring and life coaching to empower at-risk youth and survivors of sex trafficking. Previously, he served as a co-founder and leader of a community group in San Diego dedicated to assisting the families of deployed military personnel. He is also a member of Surfrider Foundation.