Social Entrepreneurship & Why It Matters 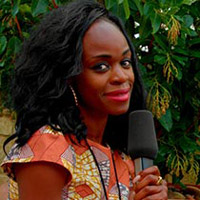 As the daughter of a Sierra Leonean former UN official, cabinet minister, and international scholar, Nzinga spent a majority of her childhood in Japan, Kenya, and the United States. Nzinga graduated cum laude from the University of California Los Angeles (UCLA) School of Film, Television and Digital Media with a concentration in documentary and scripted television production. She has worked as a host, actress, producer, writer, director and host for the past 15 years in Los Angeles, CA. From 2006 – 2008 she worked as a host, writer, producer and voice-over talent on Al Gore’s former Emmy award-winning network Current TV. After Current, she worked as an entertainment correspondent for BET, TV Guide and the Australian primetime talk show “The 7pm Project,” on the CBS affiliate Network 10 Australia. In 2012 Nzinga hosted a show entitled “Culture Click” on ABC, which won a Telly Award for Outstanding Cultural Television Program.

Because of Nzinga’s international background, she has a unique ability to create storylines and content that appeal to a diverse, global audience. She has built her brand around inspiring social change through entertainment and the arts. During the Ebola epidemic in West Africa, she founded, wrote, directed and produced a PSA campaign entitled “End Ebola Now.” The PSA was distributed virally and now airs on a new satellite television channel SES Networks in West Africa. In addition to the PSA, Nzinga created and launched a viral challenge entitled #ShakeEbolaOff with celebrities including Kevin Bacon, Naturi Naughton, Edi Gathegi, Sam Underwood, Gavin Houston and much more; in efforts to raise awareness and funds for the only fully functioning hospital in Sierra Leone at the time. The campaign received a great amount of domestic and international press and was featured in Forbes Magazine, Entertainment Tonight, The Telegraph, RYOT, Voice of America, which generated at least 1.5 billion media impressions worldwide. In 2014 The Abaunza Group brought Nzinga on to their campaign to co-direct and produce the United Nations ILO World AIDS Day and End Slavery Now PSAs featuring four-time Olympic Gold Medalist Greg Louganis and actress Garcelle Beauvais. Recently, Nzinga was the Creative content director and producer on the social impact campaign for the documentary film “Harry & Snowman,” which raised awareness about animal rescue. She directed 2 music videos for the campaign – the first video for the song “Take Me Home” with up-and-coming talent Tiffany Brevard, which highlights horse rescue and the importance of supporting the SAFE Act. The second music video she directed and produced, “(We All Are) Looking for Home,” is written by Grammy and Emmy Award-winning Diane Warren and performed by singer Leona Lewis. She also serves as a consultant and keynote address speaker for the national +IMPACT Conference where she encourages brands to embrace the power of social impact storytelling in efforts to appeal to the growing millennial/social conscious demographic. In 2018 Nzinga became a writer and producer for Season 2 of the award-winning scripted series, ‘GodComplX,’ which is a social impact initiative in conjunction with Google’s Computer Science in Media and Diversity team in efforts to inspire girls and women of color to pursue careers in STEM / STEAM. She also directed a PSA with Diane Warren and her Oscar-nominated Song ‘Stand Up For Something’ for the nonprofit Everytown for Gun Safety as a rallying call for gun violence prevention.

During her free time, Nzinga enjoys mentoring students and college graduates. She has served as an adjunct instructor at UCLA’s School of Film Television and Digital Media’s Masters and Professional Program, and in is development on projects that promote youth empowerment through entertainment, fashion, and the arts.