The two chief forms of income for most people are “earned” and “unearned” income. Earned income (generally, your compensation for work that you do) is taxed at rates
beginning at 10% and rising to 38.6% (in 2003).

Capital gain, the income earned from your investments, receives preferential treatment. The gain on investments held for a year or longer is taxed at no more than 20%. For taxpayers in the 15% income tax bracket, the long-term capital gain rate is just 10%. (A special top rate of 28% applies to collectibles held for more than a year.) In addition, a “super long-term” rate cuts two percentage points off the regular long-term rates on assets held for at least five years.

The basics of basis 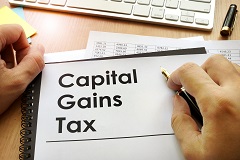 what is the cost basis of a property? When you make an investment, the price that you pay, plus any expenses incurred in the purchase, is your tax basis. Subtracting your basis from the proceeds of the sale (reduced by your sales expense) provides your taxable gain or deductible loss.

Things can get a bit more complicated when you make investments at various times and prices or have dividends reinvested. Your basis for a full sale is what you’ve spent buying the shares and paying commissions, including reinvested dividends on which you will owe, or already have paid, income tax. On a partial sale, however, the question arises of just which shares—with what basis—you are selling.

In the absence of instructions, the IRS assumes first in-first out (FIFO), which, in the case of a stock that has risen over time, can result in the largest taxable gain. For that reason, it’s a good idea to make certain that you keep written confirmation of the specific shares that you are selling.

With mutual funds, in addition to FIFO and specific share accounting, you are permitted to use an average cost per share sold. This figure is arrived at by totaling all the expenditures on the shares held at the time of the sale and dividing by the number of shares held. On request, most financial institutions can supply an average cost basis for your sales.

The basis of gifted and inherited property

A different set of rules applies to property acquired by gift. When you receive a gift, the donor’s basis becomes yours. Therefore, you will need to know the donor’s date of purchase and cost basis at the time of the gift. If the gift is of a size to trigger a gift tax, a portion of the tax paid will serve to increase your basis—quite a substantial portion in the case of highly appreciated assets.

Property transferred at the owner’s death comes with a cost-basis “stepped up” to the FMV at the time of death. Any gains from that point on are considered to be long term. In most cases, an heir’s immediate sale of inherited property results in little or no capital gains cost basis long term or loss to be recognized.

A new rule ahead

As of this writing, the federal estate tax is scheduled for repeal as of January 1, 2010. The 2001 tax law that contains the repeal provision also sounds the death knell for the step-up in basis that is generally allowed to heirs.

Instead, much like the gift tax, assets that pass to heirs will carry the owner’s (decedent’s) basis and will be subject to the capital gains tax basis when sold. However, the reverse won’t be true. Heirs will not be able to take advantage of any unrealized capital losses. When the FMV of the asset is lower than the decedent’s basis, that will be the tax basis for the recipient.

Some tax breaks are built into the new rule. Property passing to a surviving spouse will be eligible for $3 million worth of basis step-ups. In addition, an executor will be able to designate certain estate assets to receive up to $1.3 million in basis step-ups. This amount can be increased by any capital losses or net operating losses that the decedent was carrying forward.

The importance of record keeping

Whether you acquire property by purchase, gift or inheritance, you will want to keep complete, organized records in order to establish the basis in any property that you will sell for a gain. This is especially true for a property that you expect to own for many years or to transfer to your heirs at some point in the future.

As one tax specialist summed it up, the IRS starts with the premise that you paid nothing for the property. You’re only entitled to what you can prove.

The post Capital Gains: Determining Your Tax Basis first appeared on Advisors to the Ultra-Affluent – Groco.