Bad Attitudes in the Workplace 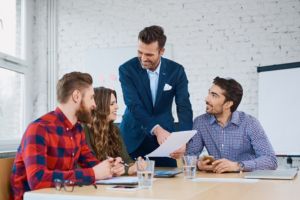 Studies show that employee morale has taken a hit lately.

Worker morale slumped last year, according to the results of a new survey from Randstad, one of the world’s largest professional employment services providers.

The review was compiled from 3,233 online interviews, conducted this spring for Randstad by Harris Interactive. It found that only 40 percent of employees said that morale at their workplace is good or excellent, down from 44 percent the year before and a departure from the recent past.

“Morale had held quite steady until this year,” says Karen Carlisle, a spokeswoman for Randstad North America.

But the drop in employee morale was dwarfed by an even larger fall in employer perception of morale. In 2004, some 70 percent of employers thought morale at their companies was good to excellent. Now, only 55 percent rate it that high.

Carlisle characterizes that as “good news,” though, because bosses now have a more realistic view of the state of mind of their workers.

One of the main reasons for the fall in morale is worker perception of company loyalty; 59 percent of workers say they are loyal to their company but only 26 percent of workers believe that loyalty is reciprocated by their firm. That has plummeted from 41 percent in 2004.

Not only that, there’s a wide disparity between how workers and employers responded to the loyalty questions.

Employers think a much higher proportion — 74 percent compared with 59 percent — of their workers are loyal than actually are.

Many more employers than workers — 43 percent compared with 26 percent — say that their company is loyal to its employees.

The impact on a business can be significant. “Low morale plus low loyalty equals high turnover,” says Carlisle. “That can hobble a company.”

The report speculates that loyalty may have sustained a severe blow from the layoffs of the early 2000s and many employees and businesses now think of the days of staying with a company for many years are over. Job security may never be as high as the old days when a worker often stayed long enough to earn a gold watch.

The report cites a few other contributors to the erosion in morale. In the last few years employees have squeezed workers to:

Reduce costs. Workers have been accepting low or no raises.

Increase efficiency. Many workers have had to take on more responsibility and tasks, and work longer hours.

Accept reduced benefits. Employees have been asked to give back many healthcare, retirement, and other benefits.

Given these findings, it’s surprising that the survey found few workers, only 17 percent, planned to look for a new job this year.

Carlisle advises that companies looking for solutions to poor employee morale should:

Employ the right people in the right job. Workers doing jobs they hate is a recipe for disaster.

Build strong employee programs. Find out what benefits are of most importance to workers. For some it’s flexible scheduling, for others regular rewards.

The post Bad Attitudes in the Workplace first appeared on Advisors to the Ultra-Affluent – Groco.